Decriminalizing marijuana is an act that has support on both sides of the political spectrum.
Two Executive Actions that can save up to $42 Billion a year that could be spent on infrastructure and prevent 500,00
arrests per year
I. Executive Actions

A. Group or Category Clemency – Amnesty for all nonviolent
federal marijuana inmates who have served 10 years for
a marijuana only offense

1. Model this initiative on Gerald Ford’s Clemency
initiative for those who violated the Selective Service Act
2. Grant commutations by creating a board within the White
House using Gerald Ford's model.

B. Remove marijuana from the Controlled Substance Act’s
schedule and regulate it like alcohol

II. Desired Objective
A. De scheduling marijuana may save up to $42 Billion
dollars a year in enforcement, prosecution and incarceration
B.  It would prevent up to 500,000 arrests per year
C. Make billions of dollars available annually for infrastructure

III. Rational
A. Over 29 states and the District of Columbia have
legalized cannabis to some degree
B. Over 70% if the population believes that marijuana should
not be criminalized
C. This is an item that has bi-partisan support

IV. The cannabis business is growing exponentially.  Like all
successful business enterprises it is based on the knowledge
and experience of past entrepreneurs

V.   It has become increasingly incongruous to have Cannabis
business plans being implemented for a product that has
given others a sentence of life without parole

VI. Challenges to overcome – Those who are financially
dependent on maintaining this administrative designation of
marijuana
A. Public Employees Unions for law enforcement,
correction officers, etc.


B. Businesses with vendor contracts for prisons and law
enforcement


D. Lobbyists for businesses and non-profits with
government contracts for re-entry and recovery


E. Lobbyists for alcohol and spirits

Regulating marijuana like alcohol will save up to
$ 42 billion that can be used to rebuild our aging infrastructure
It will prevent up to 500,000 arrests per year

The War on Drugs is a Big Government Program
Posted by beth curtis at 9:36 AM No comments: Links to this post

WE DO NOT NEED A DRUG CZAR

This is our answer to the Washington Post article by Robert O'Harrow Jr.
Meet the 24-year-old Trump campaign worker appointed to  help lead the government's drug Policy office

We do  not need a Drug Czar!

The War on Drugs has been going on for far too long. It is time to end it, eliminate the "Drug Czar" and the agency he/she administers. This is the agency that conceived the ad This is your Brain on Drugs. This ad was aimed at young people and it's purpose was to keep them from using marijuana. Not only was it ineffective, it had no educational value.

President Trump was not wrong when he contemplated eliminating this agency. Substance dependence should be treated as a public health issue and removed from the criminal justice system. We should acknowledge that this huge social experiment has been fiscally irresponsible. We need to pivot to a public health model. Court ordered treatment only adds a costly layer to the system. Of course we need ample and readily available treatment, but stop the involvement of law enforcement and call it what it is - a public health issue.

In the meantime we need to correct some of the most egregious tragedies that resulted from the drug war. Just one of those tragedies is the reality of nonviolent people who are serving sentences of life without parole for marijuana while billions of dollars are being invested into burgeoning cannabis businesses.

Let's end the war on drugs and the use of war metaphors to solve social problems. It is not fiscally responsible and is not just.
http://www.lifeforpot.com
Posted by beth curtis at 9:30 AM No comments: Links to this post 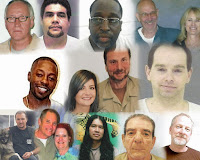 On the first day of market trading for the New Year, CNBC interspersed programing with positive stories of the new California cannabis businesses.  They covered a broad range of the issues startups would face, but the common theme was prosperity and hope.  Sam Masucci talked about the new marijuana ETF, Marcus Lemonis explored the marijuana business in Humbolt County for The Profit.

I was ushering in the New Year trying to give hope to people serving life in prison for selling marijuana while Jane Wells, Kate Rogers and Aditi Roy were convincing listeners that California’s cannabis commerce would bring promised affluence.  As the day wore on, the juxtaposition was as incredible as my conclusion – today’s cannabis business plan is yesterday’s marijuana conspiracy.  Life without parole is death by imprisonment.  The people I advocate for, nonviolent marijuana lifers will die in prison while a “new industry” in cannabis takes root.

We hoped that this category of nonviolent prisoner would all receive commutations at the end of the last administration, but they did not.  They are aging in Federal Prisons around the country while they watch the product they are incarcerated for become a main stream commodity and a source of profit for individuals as well as local and state governments.

Part of the conundrum and the most interesting aspect is marijuana remains on the federal Controlled Substance Act of 1970 as a Schedule 1 Drug.  The characteristic of a Schedule 1 drug are: 1. The drug has a high potential for abuse. 2. The drug has no currently accepted medical use in treatment in the United States. 3. There is a lack of accepted safety for use of the drug under medical supervision. 1.  This antiquated Schedule ranks marijuana as more dangerous than OxyContin or Fentanyl.  When criminal law cynically ignores the cultural reality, it can only lead to disrespect for the law and those who attempt to enforce it. According to Federal Code, All Cannabis Business Enterprises are Criminal.

Marijuana prohibition costs 42 billion dollars per year to enforce. 2.  There are up to 500,000 arrests per year by local, state and federal law enforcement.  This is an enormous government program. 3.  Billions of tax dollars are wasted every year on an incoherent policy that could repair a lot of failing bridges.  The fix isn’t complicated.  Removing marijuana from the Controlled Substance Act’s Schedule and allowing it to be regulated like alcohol is the answer.  States are moving in this direction regardless of federal law.

The marijuana prisoners I advocate for are serving life because they were charged with “conspiracy” and became accountable for drugs sold by others, even people they had never met or known. Conspiracy charges hold them responsible for acts that occurred over a period of years and involve many people.  Another common thread is they didn’t plead guilty and chose to exercise their right to a trial.  Legal experts call it the trial penalty.  Key witnesses are usually co-defendants who accept a plea and receive less prison time, government agents, and even witnesses that are testifying for a fee.

These marijuana prisoners all have names and life stories.  They have mothers and fathers, wives, husbands, siblings and children who all have suffered and wonder why there is no mercy.  Their family time is spent traveling to a Federal Prison, being searched and processed, sometimes drug tested, then sitting in a large visiting room with only two hugs allowed and lunch from a vending machine.  We are paying dearly for this in federal treasure and human dignity.  I would like to tell them that they will have a chance to be home with their family before they die.  They have been entrapped in a gigantic failed social experiment and their release would bring it all to a harmonious conclusion.

These sentences are not fiscally responsible and are not compatible with our sense that we are a nation of compassion, mercy and justice.  These nonviolent marijuana offenders with life need sentencing relief either through executive clemency or retroactive legislation.
1. https://www.dea.gov/druginfo/ds.shtml
2.  https://www.forbes.com/2007/09/29/marijuana-laws-work-bizcx_qh_1001pot.html#4674b58b5fe8
3. http://www.drugpolicy.org/do-people-still-get-arrested-and-punished-using-marijuana