Jim Webb is the most important Senator for the Legalization and Prison Reform Community. Below you will find a link to his Webb site. We are fortunate to see the tide turning in this great debate about a failed Drug Policy.
Posted by beth curtis at 6:58 AM No comments: Links to this post

The National Criminal Justice Commission Act of 2009 that I introduced in the Senate on March 26, 2009 will create a blue-ribbon commission to look at every aspect of our criminal justice system with an eye toward reshaping the process from top to bottom. I believe that it is time to bring together the best minds in America to confer, report, and make concrete recommendations about how we can reform the process.

Why We Urgently Need this Legislation:

Posted by beth curtis at 6:52 AM No comments: Links to this post

This is a report issued about the cost of incarcerating non violent drug offenders in the state of Massachusetts. It is very interesting yet only speaks to one state, but note worthy all the same.

MBA report calls sentencing of nonviolent drug offenders too harsh and
costly; suggests top to bottom overhaul of state’s failed system
Reforms could save more than $25 million a year

BOSTON, Mass. — Massachusetts must enact meaningful drug reform for
non-violent offenders, focusing on education and treatment instead of
incarceration and punishment, according to a report of the
Massachusetts Bar Association’s Drug Policy Task Force. Mandatory
minimum sentencing reform and diversion to treatment, alone, could save
the state more than $25 million a year.

the full article can be viewed here

Posted by beth curtis at 9:59 PM No comments: Links to this post

The War Against the Drug War

THE WAR AGAINST THE 'WAR ON DRUGS' From The Nation

If that old adage still holds true, then the nation may soon see a gradual backpedaling from the criminal justice policies that have led to wholesale incarceration in recent decades.

For the most populous state in the union is on the verge of insolvency--partly because it didn't set aside a rainy-day fund during the boom years; partly because its voters recently rejected a series of initiatives that would have allowed a combination of tax increases, spending cuts and borrowing to help stabilize the state's finances during the downturn; partly because it has spent the past quarter-century funneling tens of billions of dollars into an out-of-control correctional system. Now, as California's politicians contemplate emergency cuts to deal with a $24 billion hole in the state budget, old certainties are crumbling.
Can be found here

Posted by beth curtis at 11:51 AM No comments: Links to this post 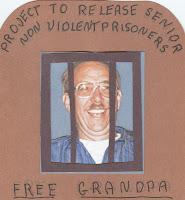 Posted by beth curtis at 10:03 AM No comments: Links to this post

Charles Lynch received a one year prison sentence.
Posted by beth curtis at 5:20 PM No comments: Links to this post